Mihaela Gaman on Her Unconventional Path to Data Science

Three years ago, Mihaela Gaman was searching for a job as a data scientist. The only problem? She had no formal experience in the field. But with a little persistence and some creative thinking, she eventually landed her dream job at CrowdStrike.

In this installment of 5 Questions, we sit down with Mihaela to talk about her journey to becoming a data scientist and what she’s learned since joining CrowdStrike. 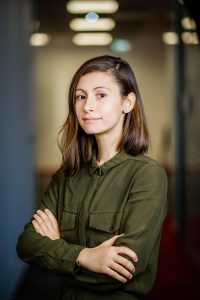 Q. Tell me about how you came to CrowdStrike because I’ve heard it’s a bit unconventional.

I wanted to work in data science, but I’d never really worked in a role like that before. I did research in data science as part of my master’s degree because I was interested in the field. I figured most companies wouldn’t take me seriously as a candidate based on that alone.
I actually applied for a cloud engineer role at CrowdStrike because that was a closer fit, as I had an engineering background. When the recruiter called me about the cloud engineer role, I was very open with her and made the case that what I really wanted to do was data science.

I showed her my research papers and everything that I did on my own. It’s a testament to what a great recruiter she was because she was open-minded enough to hear me out. After we spoke, she had a feeling that I might be a good fit for the data science team even though I didn’t have the traditional experience.

Long story short, I interviewed with the team and now I’m here. I was really happy that CrowdStrike gave me the opportunity to get my foot in the door of such an exciting industry.

Q. What do you do as a data scientist?

CrowdStrike protects our customers from security breaches, malware, all kinds of attacks and threats. But this needs to be done in an automated way because it’s not possible to have a person look at every single file that’s executed and classify it as malware or not. We need to have something more intelligent. So what we’re doing on the data science team is building models that are able to learn from the data and do some of that background work for us, so that our cybersecurity specialists can focus on more challenging issues.

Q. What drew you to cybersecurity?

To be honest, cybersecurity hadn’t really been a focus for me in the past. But now that I’m here, I see it as an opportunity to be a superhero. I’m helping to protect people from malicious activity, stop breaches, fight attackers, all sorts of things. Having that purpose is a great motivator. I think that’s the best anyone can hope for in a job.

Q. What do you think sets the CrowdStrike culture apart from other companies you worked for?

The style of leadership here is unique. People feel empowered. There is a sense of trust and ownership. I feel like I have the resources to grow and become the best version of myself, which is something that I haven’t necessarily seen in other organizations.

Also, when I say leadership, it’s not really about a title or a level. It’s a quality that you bring to your position. So, that particular element of leadership, and that everyone is expected to be a leader in their own right, is what I most enjoy about working here.

Q. CrowdStrike Romania has grown a lot since you’ve joined. How do you feel you’ve grown in your time at CrowdStrike?

Our team in Romania has absolutely grown leaps and bounds since I joined. I believe I was about the 50th employee at CrowdStrike Romania and we’re now at more than 100. So that says a lot about the trajectory of the company and the role that the Romania team has in the organization’s future.

As for me personally, before CrowdStrike, I worked in a lot of other industries. And of course I learned a lot in each of those roles. But from a technical standpoint, I grew more here in the past year than I did in five years at other companies. Part of that is because there are a lot of new and emerging technologies that we use here that other companies do not. We’re always changing things up. We’re always trying to do the latest and best thing. We’re not afraid to try new technologies and do things differently. So the team is always learning.

But there’s also a lot that comes from the people that I work with. Everyone comes from such different backgrounds, and I learn a lot from working with them. That’s what makes CrowdStrike such a great place to work — we’re a game changer, a leader in the industry, and you learn a lot when you work for the best.


Are you interested in joining CrowdStrike Romania? Browse our job listings to review open positions at CrowdStrike today.