1. Who is Plan.net Technology and what are its biggest achievements?

Our QubID solution uses AI to setup accounts and connect people. It is based on the Microsoft Azure Face Recognition stack: Face API.
We have been using reactive programming on both Java and Swift.
We are starting a new project in Flutter, the newest mobile framework from Google.

3. What is the latest framework the team is working at this point?

We are working with Flutter, the latest mobile development framework created by Google.
Flutter allows the development of mobile applications on iOS and Android platforms from a single codebase.
Flutter may be seen as a direct competitor with React Native.

Flutter provides native performance across devices, abstracting all the critical UI differences.
It allows creation of expressive and flexible UI with focus on native end-user experiences. It allows full customization of the design. Hot reload makes the development way easier. 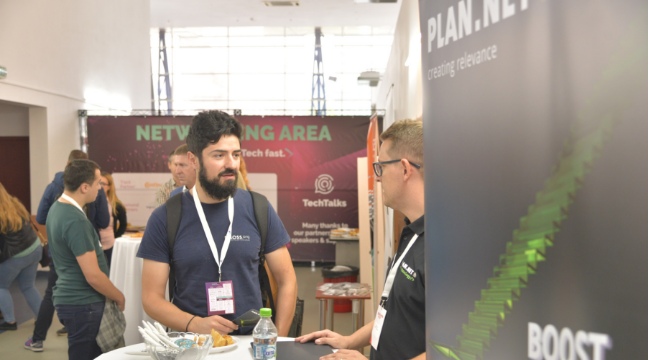 5. If I am a junior programmer and I want to start learning to build mobile apps, should I start with Flutter?

Flutter may be the future for mobile development. It’s programming language, Dart, may be a new one, but it’s learning curve is quite fast. Flutter has support for the important tools during apps development: testing (unit and widget), mocking, continuous integration, etc.
Flutter main rival, React Native, has the disadvantage that is will always be slower than native performance because of the way it works (it adds the bridging code on top of native code). However, React Native uses JavaScript as programming language, which is easier to learn than Dart and it is already used by a lot of developers on web.

6. Why should I consider Flutter as a key framework to work with?

The progress that Flutter has shown during the last half a year makes us think that it will be a key player on mobile development during the following years to come.
Our experience with Flutter shows that you can create simple (but not only simple) UI and interactions in no time on both platforms using the same code base. With a little bit of effort one can also integrate Flutter into existing iOS and Android apps and start delivering new features from the same code base.

7. How can Flutter change the future mobile apps?

If Flutter will be adopted by more and more developers and companies and its support from Google will remain the same, it can become a major player in cross platform mobile development.

Andrei Durnea, Senior Mobile Developer. Enthusiast software engineer with a strong background in mobile app development. Extensive experience in developing, deploying and evaluating products. Focused on delivering quality and efficiency while taking into account the alignment of end-user needs with long-term resolutions to complex IT challenges.

Gabriel Dusa, iOS Team Lead; 10+ years of experience in programming, has 8 years of experience in mobile development (iOS, Android). Gabriel worked in multiple companies, developing cutting edge mobile apps, being responsible on the applications architecture and deciding technically on the solutions adopted whitin the teams. He is now the team lead of the iOS team developing Plan.net iOS mobile applications.


9. From your personal experience, what are the top 5 things you like at Flutter?

The best things we liked so far during our experience with Flutter were: develop once and deploy on both platforms iOS and Android, easy to create UI (you do it from code, but there are some open source initiatives for visual tools), simple architecture (widgets, state), hot reload, open source packages are growing fast.

Book your place as soon as possible at our TechLab, Flutter TechLab, Saturday, 16 March, Room B, at 12:40.