ESG Impacts of the War in Ukraine: Global Food Supply

The invasion of Ukraine highlights the fragility of the global food system. The destruction caused by the war and subsequent trade restrictions on Russia, endangers a significant percentage of the global food supply coming from two of world’s leading agricultural commodity exporters, consequently prompting food prices to surpass the 30-year high. Another hike in food prices will severely affect the poorer grain importers with particular concern for parts of the Middle East, Sub-Saharan Africa, and Asia. At the same time, surging fuel and fertilizer prices present a risk to farmers and growers around the world.

Russia and Ukraine are net exporters of agricultural commodities, while Russia and Belarus play leading roles in the global fertilizer supply.

Ukraine accounts for 10% of the world wheat market, 13% of the barley market, 15% of the maize market, and is the most critical player in the market for sunflower oil, accounting for over 50% of world trade. In Russia, these figures are respectively 24% (wheat), 14% (barley) and 23% (sunflower oil). North Africa and the Middle East import over 50% of their cereal needs from Ukraine and Russia. Ukraine is also an important supplier of maize used as feedstock to the European Union and China.i

Russia is also a significant player in the global fertilizer market, as the top exporter of nitrogen fertilizers, the second leading supplier of potassium fertilizer and the third-largest exporter of phosphorous. Also, note that Belarus accounts for approximately 17% of the global production of potash. 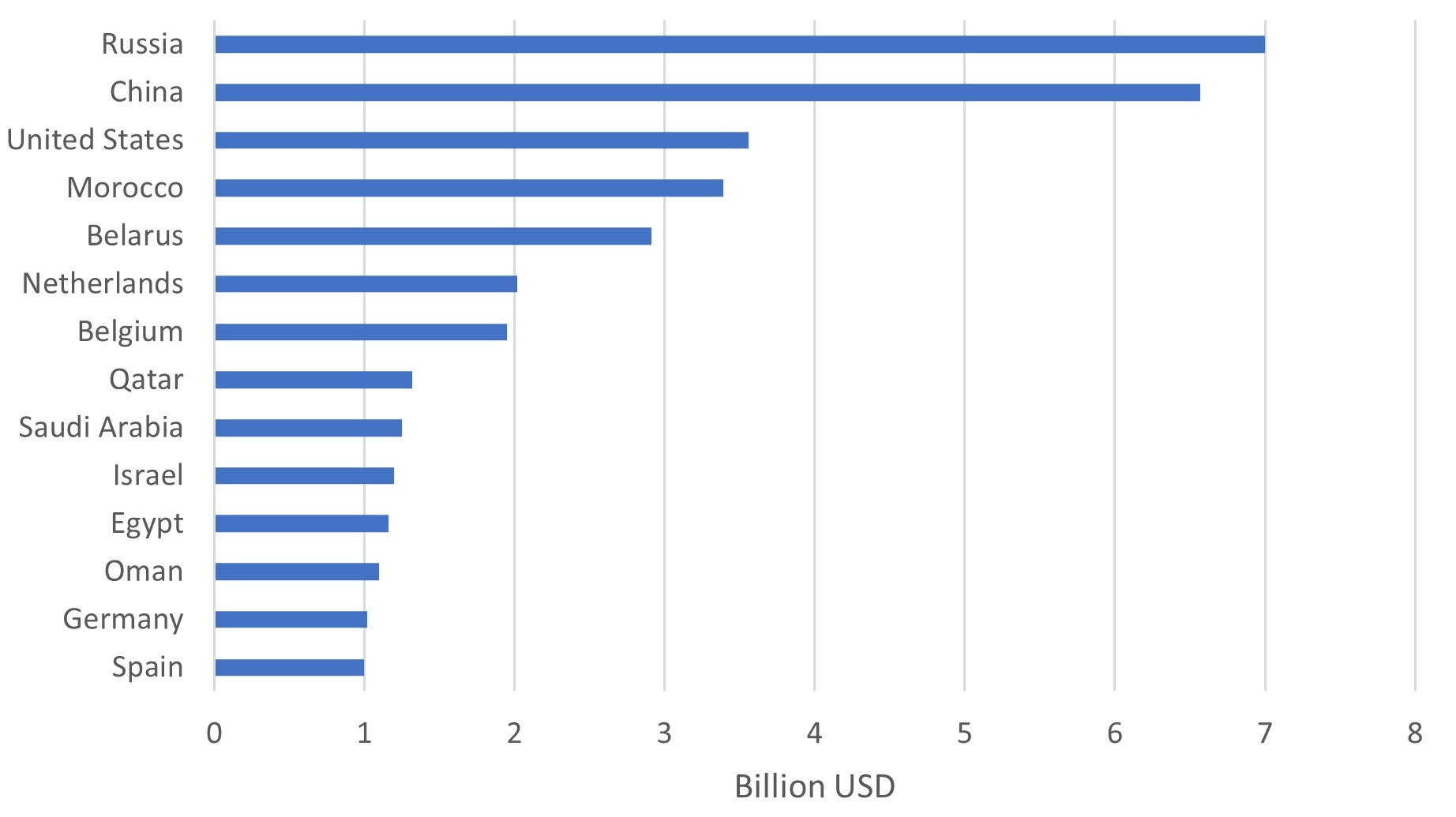 Sowing the Seeds of an Uncertain Future

As the end of the sowing season approaches quickly and the cost of agricultural input soars, disruptions to the 2022 harvest appear inevitable.

The fertile farmland of Ukraine has found itself at the center of the battlefield, with Ukrainian farmers torn between defending their country or tending to their fields. If they are unable to meet the punctual demands of this year’s sowing calendar or attend to their crops through the growing season, it is estimated that the price of wheat may double or even triple. The uncertainty over the availability and price of fertilizer, fuel and other agricultural chemicals are additional causes for concern for the growers.

It has been reported that the most productive agricultural land of Ukraine has been severely damaged by aerial attack and artillery bombardment,iii making farm work impossible, while the continuing war may further damage inland transport infrastructure and seaports, as well as storage and processing infrastructure in Ukraine.iv Food already harvested has been held up due to port closures, the suspension of manufacturing operations and the introduction of export licensing requirements, causing a significant disruption to the global food supply. Trade restrictions on Russia may further exacerbate the problem.

Countries that are net food importers are facing the brunt of an impending food security crisis.

Often lacking the proper conditions to grow sufficient food themselves, lack of water and other resources, or the right climate conditions, these countries rely on wheat imports to fulfill basic food security needs. To make matters worse for these countries, other countries besides Russia and Ukraine may also limit exports of wheat and grains. While this is against World Trade Organization agreements in general, there are major loopholes that allow countries to limit food exports to prevent national food shortages.

As approximately half the Ukrainian population faces food insecurity, the international community should not overlook the massive impact the war is having on food availability elsewhere. Major food crises are looming in African and Middle Eastern countries including, Egypt and Yemen, as these countries are all highly dependent on wheat imports from Ukraine and/or Russia.vii 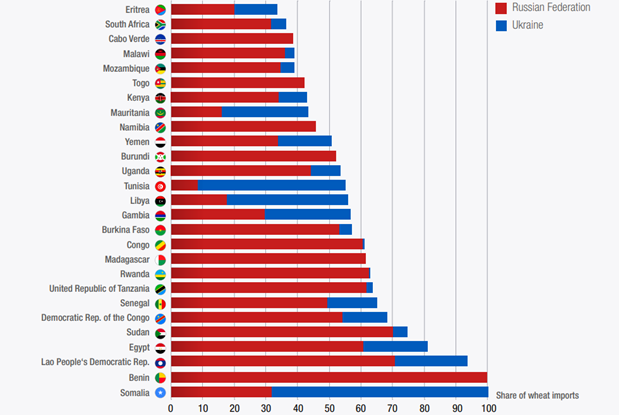 Source: UNCTAD calculations, based on data from the UNCTADstat databaseviii

While Ukraine and Russia Fight, Others Battle Climate Change

Other countries are unable to compensate for the drop in food exports out of Ukraine and Russia due to disappointing or failed harvests. Meanwhile, food prices, and uncertainty, are rising fast.

What is also worrying is that other food-producing countries will have difficulties meeting the increased demand for wheat and other essential food commodities. China and the United States are also important producers of wheat. However, these nations are looking at severely impacted wheat harvests for very different reasons.

In the U.S., severe drought is curbing wheat harvests in Kansas, Oklahoma and Texas—states that are responsible for a large portion of U.S. wheat production.ix On the other hand, in China, heavy rains in September and October 2021 have led to very unfavourable planting conditions.x Meanwhile, soy harvests from Brazil and Argentina have also disappointed this year so far. Soy is another important commodity in the global food system, particularly in livestock and dairy production, as an important source of animal feed.

All these factors have culminated in an all-time high in the food price index of the Food and Agriculture Organization (FAO) of the United Nations in February and March 2022. 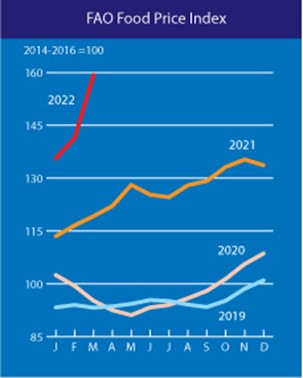 Source: Food and Agriculture Organization (FAO) of the United Nationsxi

The decrease in supply from Ukraine and Russia, along with failed harvests elsewhere, combined with the increased costs of synthetic fertilizer, fuel and seed, are likely contributors to other all-time highs in the FAO Food Price Index further into this year. Insofar as farmers have not yet secured fertilizer input already, those that rely on synthetic fertilizers for crop production are faced with massive uncertainty about future costs. For example, a March survey in Brazil showed that 72% of fertilizer needs for the second half of the year are not met. As such, Brazilian farmers will be faced with massive fertilizer costs in the second half of the year to provide crops with nutrients.xii Regenerative agriculture, however, could prove to be a way to circumvent these high fertilizer costs.

Regenerative agriculture provides an attractive solution to the application of synthetic fertilizer and other agricultural chemicals.

Encouraging the existence of biology in the soil and building soil structure are the fundamentals of regenerative agriculture. Through this, carbon sequestration, better water retention and nutrient cycling can be achieved. Nutrients including nitrogen, potassium, phosphorus and calcium are found between the bedrock and the topsoil, in their organic form attached to the sand, silt and clay particles. These nutrients are present and plentiful in all soils worldwide, but they only become plant available when the correct balance of biology is also present in the soil. This is why old-growth forests continue to exist without the addition of synthetic fertilizers. On the opposite end of the scale, the more damaged the soil is, through tillage, heavy machinery, and chemical applications, the less likely the appropriate biology exists and nutrient cycling occurs.

By shifting towards regenerative farming practices, we utilize biology to tap into the earth’s supply of nutrients and remove our dependency on synthetic fertilizers and other chemical inputs such as pesticides, insecticides, and fungicides. By working with the land, instead of against it, carbon is stored in the soil rather than released. Cover crops turn bare soil into a nitrogen supply system. Agricultural waste is redirected from being a burden to a source of nutrients through composting. Investors and companies with exposure to agriculture can reduce their risk exposure to volatile energy and fertilizer prices and physical climate risk by encouraging this transition to nature-based climate-resilient farming and ridding the chemical dependency. Farmers in Europe, North America and the UK started to explore the idea of regenerative farming in response to the increasing fuel and fertilizer prices in 2021 which pushed farms to the brink of collapse.

Grassroots Growth in the Supply Chain

While smallholder farmers across the world are starting to adopt this holistic approach to farming, several multinational corporations have also joined the movement.

Among the few companies announcing goals or initiatives for regenerative agriculture captured under the Sustainable Agriculture indicator are Danone SA (scoring 78.8/100 on Land Use and Biodiversity – Supply Chain), General Mills Inc (63.7/100), Hormel Foods Corp (59/100), McDonald’s Corp (72.7/100), Nestle SA (68.8/100), PepsiCo Inc (NA). We consider these companies ahead of the curve relative to their peers. Still, their preparedness and ability to mitigate climate related risk will depend on the success of these initiatives and goals (see exhibit 4) to embed the nature-based approach in their food value chain.

Get in touch with us to learn more about leveraging Sustainalytics’ ESG Risk Ratings to assess the preparedness of companies in the transition to more sustainable food system.